Home for a Flying A Couple

Home for a Flying A Couple

More than 1,000 people were employed by the Flying A film studio in Santa Barbara; it was said to be the city’s largest employer. So it’s not surprising to find a house that was home to some of them. Armand and Eva Bonnard were the first owners of the home at 2319 Wellington Avenue. They both worked behind the scenes at the American Film Company, the studio’s official name. Armand was the manager of the auto department. Eva worked in the accounting department and played bit parts in some films as well. According to former homeowners, Eva also worked as the personal secretary for Flying A starlet Mary Miles Minter. Minter was one of the country’s top ingénues of the 1910s and early 1920s. In 1919, she moved to a Los Angeles studio.

A Home and a Barn

Armand had previously worked for Vogue Films, Inc. in Los Angeles, before joining Flying A in 1916. I found a couple of articles about him and Eva in a 1919 movie magazine. “The [Flying A] garage houses 17 motorcars and trucks … and all of the repair work on the cars is handled under the supervision of A.A. Bonnard in the company machine shops, where modern lathes and equipment provide for any emergency.”

The magazine also reported on an interesting event involving the future Mrs. Bonnard: “Miss Eva Wilson, cashier of the American Film Company, enjoyed a stunt ride in an aeroplane over the studio grounds one day last week with Lieut. Poppic, who gave her numerous thrills by doing the loop, wing-over, tailspin and nosedive. Miss Wilson now declares straight flying to be a very tame affair” (Camera, October 4, 1919).

The History of the Land

In addition to looking at the former owners of a home, it is often interesting to look at the former owners of the land. Wellington Avenue is a small portion of an 18-block piece of property owned by William Van Vactor, a wealthy miner from Sacramento. Van Vactor bought this property in 1874, just two years after Stearns Wharf was completed. The construction of the wharf was a major milestone in Santa Barbara’s history because it increased the ease of reaching the city. The railroad did not reach here until 1887.

The Flying A was located on the block bordered by Mission, Chapala, Padre, and State streets. In its heyday in the 19-teens, the Flying A was one of the major producers of silent films. It was only three blocks away from this home. One of the studio’s buildings still stands: the one-story Mission Revival–style office building at the northwest corner of Mission and Chapala.

The Bonnards moved into the home in 1926 and lived here until 1938. The Flying A ceased producing movies in 1921. After that, Armand became part owner of a car repair business. Other owners of the home included Grover Riddle, Dana and Marion Barnes, and Marion Jean Porter.

The home is an example of the California Bungalow style that was popular from about 1910 to 1925. These bungalows are generally one-and-a-half stories. They developed as urban areas expanded when more families owned automobiles. The term “bungalow” has a fairly exotic origin: coined by the British in India, meaning “a house in the Bengali style.”

The most interesting feature of this home is the dramatic ogee arch that crowns the opening between the living room and dining room. This type of arch is composed of two S-shaped curves. One wonders if the Bonnards’ background in movies inspired this distinctive feature.

While researching this home, I discovered that in the 1930s, the next-door neighbors were William H. and Maude Diehl. They were related to the Diehl family at 21 E. Mission Street, a home that I wrote about in February of this year, proving once again what a small town Santa Barbara can be.

Please do not disturb the residents of 2319 Wellington Avenue. 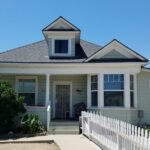 Postcard from The Past 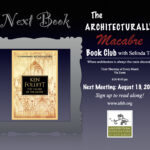