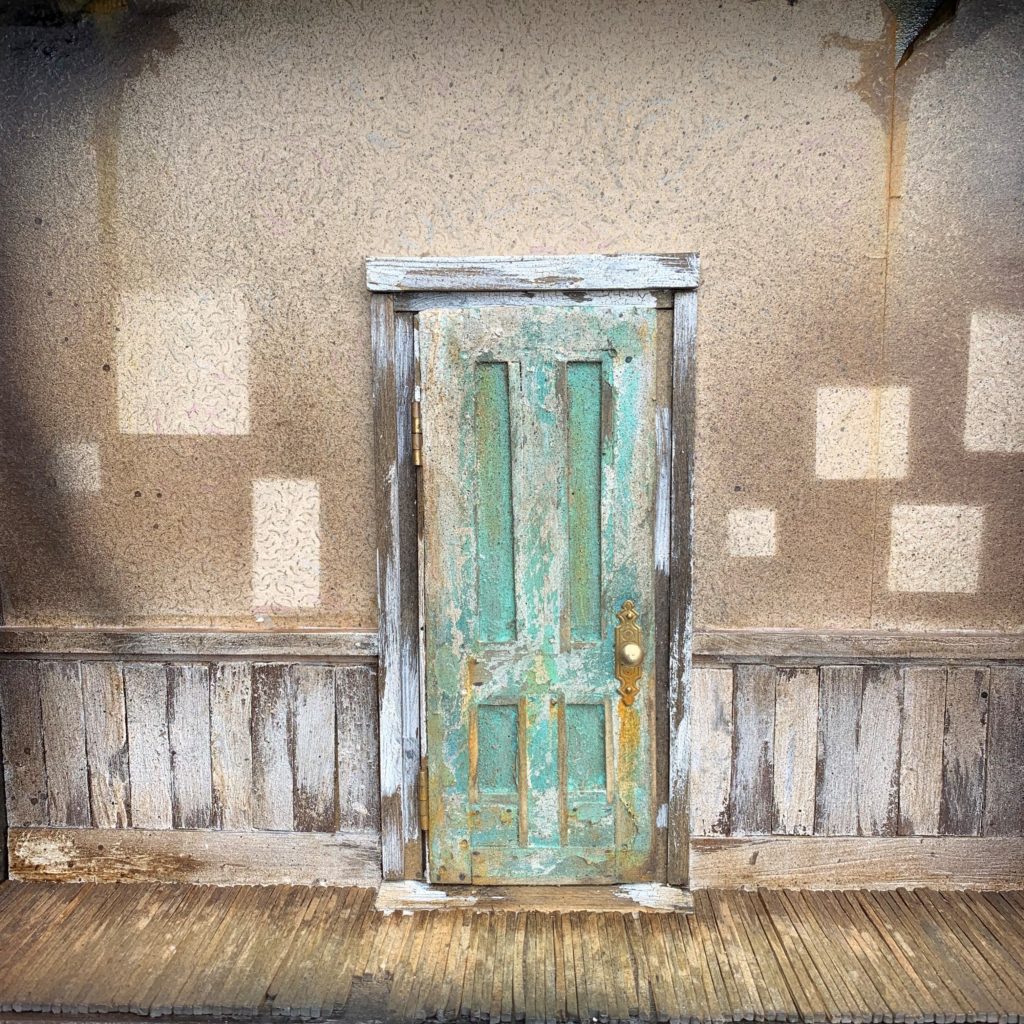 Hole in the Wall is a capsulized study into unnoticed aspects of the physical world as well as the dark corners of Michael Long’s mind. Blending aspects of real, typically local, architecture with images from his imagination, Long creates unique assemblage boxes that emit a preternatural vibe.  He draws from the twin wellsprings of his recurring childhood dreams, nightmares, and memories and his careful observations of actual buildings in Santa Barbara. These small, precisely constructed works are eerie reminders of forgotten spaces – both interior and exterior – surreal architectural fragments that evoke curiosity and a myriad of associations and feelings in viewers.

For this series, Long built his wooden boxes by hand and incorporated vintage papers as well as “discarded, recycled, and unwanted things”.  Each of these creepy yet elegant “dream boxes” conjures up a time and place that only exists in his mind.  Like miniature, psychological movie sets or weird, diminutive stages, they bubble up from the depths of a restless soul seeking and often finding a strange stillness and evocative beauty.

Join me as we tour stunning structures and discover why visitors never want to leave...even after death.

While no one can prove that ghosts actually exist that doesn’t mean certain structures do not appear to have a nefarious look to them. What with their foreboding exteriors and ominously lit interiors, it’s no wonder some buildings appear too eerie to enter. But, there is a whimsical elegance to places that have experienced lifetimes of occupants, as if hiding a secret that only the ghosts can relay, and in these eerie destinations, they just might entice you in. Behind their opulent facades hides a skeleton – or two. The creek of a floorboard or the flicker of a light is just the beginning of the frightening tales these locations have to tell.

Since ancient times, tales of spirits who returned from the dead to haunt the places they left behind have figured prominently into folklore of many cultures around the world. The architectural style of these haunted houses is not necessarily spooky, but each successive generation deems a past architectural style as scary and haunted.

People began to view Victorian houses as unkempt, unsanitary, gloomy and dark during the 20th century. The architecture itself gained a reputation because it is based on historical styles of Gothic, Roman and Greek mixed all together. This mix made it seem as though the homes were in a disheveled state and somehow haunted.

Legend has it that Sarah Winchester, the rifle heiress, was haunted by the deaths of her child and husband and built a huge Victorian home in San Jose, California with the help of her spiritual guide. The home’s architecture became a testament to turmoil and is now a tourist attraction.

Another scary home in America is “The House of the Seven Gables“. The author Nathaniel Hawthorne wrote a book about a witchcraft-cursed, 17th century home. He wrote the book at the beginning of the Victorian era where new homes were spacious and bright, with large bay windows. Today, the inspiration for the story is a house museum in Salem, Massachusetts. The house is somber and dark in color, with small windows.

By the 20th century, Victorian homes were considered the most haunted of all types of homes and movies and television certainly helped to perpetuate this belief. In the movie, “Its a Wonderful Life”, Jimmy Stewart and his wife fix up the neighbor’s abandoned Granville House. Both “The Munsters” and “The Adams Family” TV shows showcased ghoulish families living in huge Victorian homes. Even Walt Disney used the facade of the Southern Victorian architectural style as the foundation for Disneyland’s famous Haunted Mansion.

Arts and Crafts style architecture in the early 20th century cleaned up Victorian excesses. But homes such as The Gamble House, designed by Greene and Greene, were used as spooky settings in movies such as “Back to the Future” and “Zathura”. The Dutch-Colonial style homes were also used in movies such as “The Amityville Horror”. New Orleans’s style homes with the wrap around porches, huge wrought iron columns, pediment and crowning turret echo the houses of the coastal South and have a reputation for being haunted by restless souls who have not yet departed.

San Diego is home to a haunted house in Old Town called The Whaley House. This home was built with mid-nineteenth century Greek Revival architecture and was formally named as a historical house museum in 1960. It is one of Southern California’s most popular visitor destinations, and people from around the globe come to experience this world-renowned museum.

Hawaii is also home to some of the most famous haunted houses and is known as one of America’s most haunted states. In the 1940s, the Kaimuki House started to gain notoriety as being filled with ghosts and demons. Many families have either moved or vacationed here over the years, only to be thrown out by strange and dangerous unexplainable occurrences.

No matter what the style of home, there will always be something chilling about an unkempt, spooky house.

But don't wait for me! Can you identify these locals?

Please share your ghostly encounters, before we dig ...even deeper.​

The dark histories behind these architectural gems are as spooky as they are beautiful… Take a tour with me as I explore stunning structures and spooky locations to discover why visitors to these haunts never want to leave – even after death.

Abstract Trompe L’oeil highlights Wilson’s deep interest in the interplay of colored surfaces. Her previous paintings were conventional still life paintings depicting recognizable objects with reflective, transparent surfaces that appear as small abstractions. Creating these paintings led her to the idea of creating purely abstract still life paintings. At first glance, her new work appears to be flat, hard edge, geometric and abstract. Upon closer observation, viewers are drawn in by the illusion of depth.

To create these unusual paintings, Wilson first constructs an abstract “still life”—a three-dimensional composition of opaque, translucent, and transparent papers, and colored gels.  After arranging lighting above to create a kaleidoscope of reflections, she paints the “still life” from direct observation, challenging herself to create the illusion of three dimensions and transparency using only opaque pigments.

Although the paintings are formal compositions, they evoke futuristic cities, outer space, and science fiction settings. Surface flatness and the illusion of depth coexist simultaneously, creating spaces where the interplay and fusion of saturated colors, abstract shapes and imagination magically coexist.

Wilson received her BA in 1979 from San Francisco State University where she studied with Robert Bechtle, a photo-realist painter. She completed her MFA in 1982 at UCSB where she studied with Ciel Bergman and William Dole. She has maintained a studio and residence in Santa Barbara for 40 years and has participated in many group exhibitions and several solo exhibitions. She currently teaches art classes at SBCC School of Extended Learning.

A workshop to demonstrate the process of setting up an abstract still life and translating it to a painting will be held on Saturday, October 26, from 1-3 pm (Cost $30.00) at the AFSB Gallery. To purchase a ticket please visit the Architectural Foundation’s website.