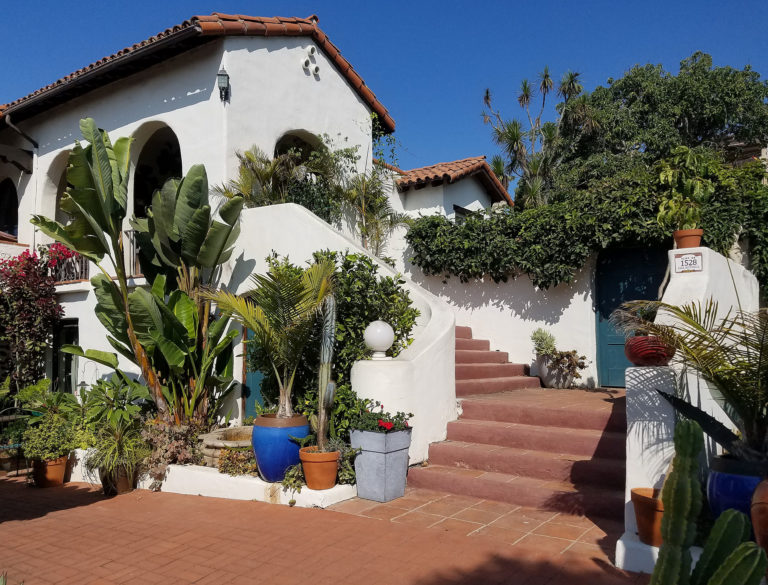 It is easy to miss this home as you cruise along the Mesa’s main thoroughfare. It sits above the road, surrounded by lush greenery. But it’s worth slowing down and looking up the hill at this high-style Spanish-Colonial Revival house. In addition to the colorful flowers in the gardens, it has been home to several colorful residents in its 95 years of existence.

This home is one of five adobes built on either side of La Vista del Oceano, on the north side of Cliff Drive in the mid-1920s. Fred Roskop was the builder. He had lived in Mexico for several years where he learned adobe construction before he settled in Santa Barbara in 1919. In addition to building homes, he was responsible for building the adobe Monterey-style Mihran Building at 17-21 East Carrillo Street.

Adobe bricks usually measure 20 x 12 x 4 inches, are made of mud, water, and plant materials, and then dried in the sun. But by the 1920s, the traditional method of mixing the ingredients was no longer used. “The time-honored method of working the binder into the mud … is for the workmen to divest themselves of shoes and socks and work the mud with their bare feet. This method is not employed in the present instance, however … the earth is full of pieces of glass and other sharp objects which would play havoc with unprotected soles.” (Santa Barbara Morning Press, January 19, 1922)

The home’s first owners were Thomas G. and Frances E. Ross. Thomas was in the car business, and he also owned a couple of the nearby oil wells. At first, I was shocked by the proximity of the oil well in the old photo. But I suppose if you are pumping money out of the ground, those oil derricks can start to look attractive.

Before the oil derricks sprouted up on the Mesa in the 1920s, the area was mostly farmland punctuated by a picturesque lighthouse (near today’s La Mesa Park), and the Dibblee mansion (near present-day Santa Barbara City College). The area where the 1528 Cliff Drive home sits today was a 50-acre farm that George and Emma Gaylord bought for $1,000 in 1868. At the time, Cliff Drive was simply called Mesa Road, and was the only access to the Mesa. An article in the local paper stated, “Mr. Geo. Gaylord’s farm … yields abundantly barley, corn and squashes.” (Santa Barbara Weekly Press, June 4, 1881) The Gaylord’s neighbor on the west was Peveril Meigs. George Gaylord died in 1923, and that’s about when Fred Roskop bought the property along Cliff Drive.

The second owners were the Adams family. No, not the Addams Family from TV. They were Charles and Rachel Adams. Rachel was famous as Madame Rosinka, who had her office on Stearns Wharf where she specialized in palm, tarot card, and psychic readings. The Adams owned the home from 1962 to 2011, when they sold to Wally Ronchietto. He is the third and current owner. Wally is an Argentinian who presided over Santa Barbara’s Café Buenos Aires from 1997 to 2011.

Many historical records are unavailable now, and have been for six months, because of the COVID-19 lockdown. The closure of city offices, county offices, and libraries ​— ​while necessary ​— ​makes it hard for house detectives. Some of the information in this month’s column came from a report done by the Post/Hazeltine team for an assessment to designate this home as a City of Santa Barbara Structure of Merit.

The Post/Hazeltine research team revealed that this home has had multiple house numbers over the years. This can make it difficult to untangle a home’s history. Fortunately, the website for the Gledhill Library at the Santa Barbara Historical Museum has Sanborn maps and city directories (old phone books) available on their website.

Please do not disturb the residents of 1528 Cliff Drive. 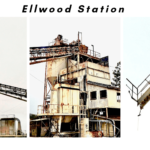 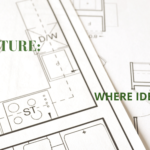