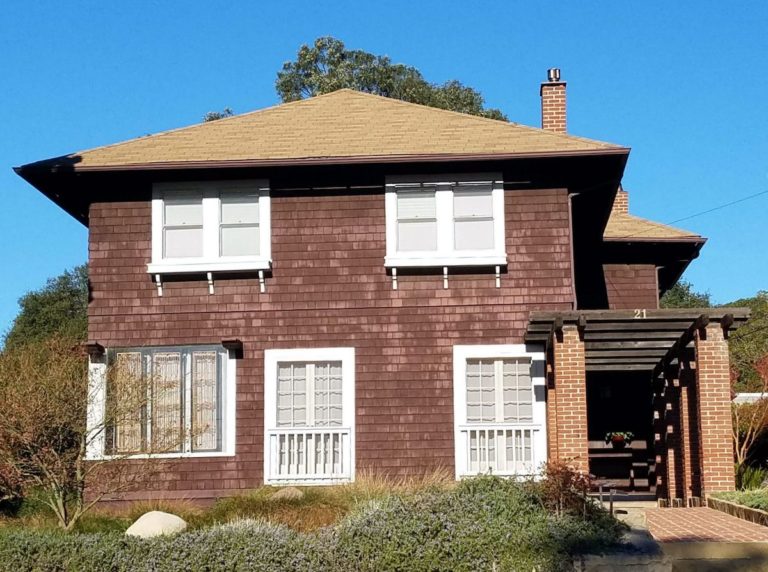 Ours is a city dominated by Victorian, Craftsman, and Spanish Colonial Revival homes. We do, however, have some fine examples of additional styles more prevalent elsewhere in the country, and the American Foursquare, a type of “Prairie” style, is one. Frank Lloyd Wright is the most famous architect associated with this style, which is common in the Midwest.

A Prairie-style home is usually characterized by a low-pitched hipped roof, shaped like a pyramid. Wide eaves emphasize the horizontal lines of the house. This architectural style is all about straight lines and angles — there are no curves or frilly details.

The first owner of the home at 21 East Mission Street was from the Midwest, so his idea of the perfect home may have been influenced by the architecture there. This home’s Prairie-style angularity is echoed in the brick front walk, which is paved in a double basketweave pattern, and the Japanese shoji screens in the front windows.

A Young Couple Builds a Home

The home was built about 1911 by Edward A. and Nellie Diehl. Edward was from Missouri and Nellie (Elizalda) had grown up in Santa Barbara. When they married in 1905, the local paper described Edward as “one of the city’s most promising young businessmen” and noted that Nellie was “a descendant of one of the oldest Spanish families in California.” They later had a son named Frederick, who is believed to be the one who carved the initials “FD” on a shingle at the back of the house.

Edward’s father, John Frederick Diehl, started a gourmet grocery store in 1891 when the family arrived here. Diehl’s Grocery was located at several different locations on State Street in the half century that it was in business. The store sold imported delicacies from Europe, as well as local produce, and was famous for its elaborate sidewalk displays. The store sold its own baked goods, homemade mayonnaise, and candy and had a soda fountain that served oyster cocktails! In 1905, the grocery’s ad in the local paper boasted that the store sold a “new health food — toasted corn flakes.” Both Edward and his brother William worked at the store.

In the late 1800s and early 1900s, before many families had automobiles, Diehl’s Grocery had its own horse-drawn delivery wagon. That wagon now belongs to the Santa Barbara Carriage and Western Art Museum. You may have seen this vehicle in Fiesta parades.

The Diehl family left Santa Barbara in the 1940s, and the home was occupied by several owners until 1965 when George and Shigeko Nishihara bought the home. George was a cabinetmaker and made the intricate shoji screens in the house. Members of that family have owned and lived in the home ever since. Brian and Vicki (Nishihara) Woolford have lived in the house since 2010. Vicki spent her formative years in the home before she settled in Hawai‘i for some 40 years, where she and Brian met.

The backyard is a quiet, brick-carpeted oasis shaded by a coastal live oak that an arborist estimated to be 150 years old. A seasonal creek in the back provides water for the tree. Since the tree predates the house, the Diehls may have chosen this site because of the tree.

What do the Woolfords like best about their home? The walkable location and the architectural diversity in the neighborhood, they told me. 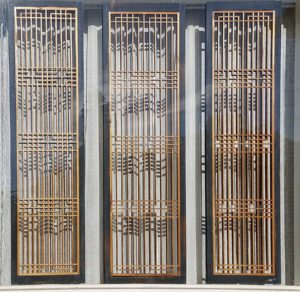 I was struck by the repeating patterns of the house and its occupants. Frank Lloyd Wright collected Japanese woodblock prints, and this ties in with the shoji screens in the front windows. The screens echo the brick pattern on the sidewalk. The Woolfords moved here from Hawai‘i, and in researching the Diehl family, I discovered that Edward Diehl and his brother William had both spent time in Hawai‘i in 1901.

Please do not disturb the residents of 21 East Mission Street.

Betsy J. Green is a Santa Barbara historian and author of Discovering the History of Your House and Your Neighborhood, Santa Monica Press, 2002. 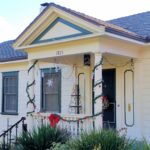 Beauty Out Of Ashes by Sophia Beccue