A number of homes and estates in the Santa Barbara area have names. Some are fairly well known, such as Bellosguardo or Casa de la Guerra. Other names are less familiar, but the house at 1821 Anacapa Street has a name that no one seemed to be aware of — including the present owner: Rosemary Cottage.

This Colonial-Revival style home appears to have been built about 1916, since the house was listed for the first time in the 1917 city directory for Santa Barbara. Colonial Revival homes were popular from about 1880 to 1955, and generally have a center entrance that is accented with a gabled porch supported by round columns.

The first occupant was an older widow named Julie Matthews Hinsdale, whose daughter — Corinne Hinsdale Whitelaw — lived across the street. When Julie passed away in 1918, the local paper mentioned that her home was named Rosemary Cottage. Presumably, there were rosemary bushes in the yard. The only references to the home’s name date to 1918, so it’s not surprising that the name has remained a mystery for more than 100 years. The home’s owner was not aware of the home’s name. That was the first discovery. The second discovery came later.

In 1919, the home’s most distinguished resident moved in — the landscape artist Thomas Moran and his daughter, Ruth. Moran’s main home was in East Hampton, New York, and is a National Historic Landmark. Starting about 1916-1917, the 80-year-old Moran and his daughter began spending their winters in Santa Barbara. The first couple of years, they stayed at the Potter Hotel and other places. But about 1919, they bought the home at 1821 Anacapa Street and began spending every winter in Rosemary Cottage.

Moran’s name is not especially well known today, but in 1917 he was famous enough that the local paper devoted nine paragraphs to him in an article titled, “Noted Painter of Big Views Arrives; Thomas Moran is Famous for His Canvases of Western Outdoor Wonders.” The article ended with a quote from him, “Santa Barbara is the most beautiful city, with its environs, I have seen in all California.”

In 1871, Moran was part of the team that surveyed the Yellowstone region. It is believed that his sketches were a large part of the reason that Yellowstone became the first national park in 1872. His nickname was “Yellowstone Moran.”

n 1919, the Santa Barbara Public Library, which doubled as an art museum, exhibited one of his paintings. The local paper stated, “The painting is of the Shoshone Falls, Snake River, Idaho, and is considered by connoisseurs, one of the artist’s most important canvases … The canvas is 6×12 feet, and was painted in 1900 … The picture has been exhibited in several cities and is now going to the Grand Canyon.”

Some of Moran’s landscape paintings are hung in the Smithsonian Museum in Washington, D.C., and a couple are in the White House. During President Obama’s administration, Moran’s painting of Wyoming’s Teton Mountains hung in the Oval Office. Moran died in Santa Barbara in 1926 at age 89. He is buried in East Hampton.

After his death, the house was sold, and at least five families moved into and out of this house until 1965. In that year, Berry A. Watson and Mary Loretta Watson purchased the home for about $42,000. They raised their large family here, and today one of their sons is happily living in his childhood home. He shared that his favorite part of the house is the front porch with its pillars and railing. About a dozen copies of Moran’s landscape paintings adorn the walls.

A second discovery came as I was leaving the house. I glanced up and noticed a carved plaque above the door — it showed a few branches of rosemary! The present owner, upon learning that the home was Rosemary Cottage, says he is considering planting a rosemary bush, “to honor the past life of the house.”

Please do not disturb the residents of 1821 Anacapa Street. 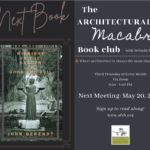 May: The Architecturally Macabre Book Club 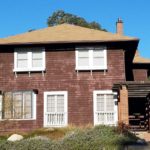