This c. 1900 home at 324 North Soledad Street was the only house on the block until 1917. Built on a small hill between Montecito and Gutierrez streets, on what was then the outskirts of the city, this Queen Anne–style home probably overlooked the city when there were fewer homes and trees in the area. Soledad (pronounced so-LAY-dad) means “solitary” in Spanish.

The home is painted historically appropriate earth-tone colors that owners Chris Emanuel and Paul Lommen had carefully researched. The colors accentuate the home’s original details. The steep slope of its roofline marks it as an older home among the shallower slopes of the newer homes that surround it. The home’s crowning glory is the cheerful sunburst motif that accents the front gable. This was a popular decoration for homes of this vintage. I’ve noticed it on other homes here. Keep an eye out for it as you walk around.

Built by a Pioneer Family

The family of James Augustus Blood built the home. Blood and his wife, Mary Josephine Hall Blood, had traveled from Illinois by covered wagon in 1870 and settled in Santa Barbara. The Blood family came here because a relative, also named James A. Blood, had settled on a farm in Carpinteria in 1867. (My research was made especially challenging because both men shared the same name and died within a year of each other. The James A. Blood who built this home was referred to as James A. Blood Junior to distinguish him from the Carpinteria farmer, although the farmer was his uncle, not his father.)

The Bloods raised six children in Santa Barbara — several of whom spent their adult lives in this home. The most prominent was Alice Mabel Blood, who was an accomplished painter and had been Saint Barbara and the Festival Queen in the Flower Festival parades of the 1890s.

James A. Blood was in the real estate business and was co-owner with Francis H. Knight of the House-Furnishing Emporium on State Street near Ortega. The store sold furniture — everything from baby carriages to coffins. The company once caused a controversy, according to Walker A. Tompkins. In his newspaper column in 1971, he wrote that in the 1880s, the firm of Blood and Knight put a huge sign on the side of a building facing Stearns Wharf that read: “BLOOD AND KNIGHT, UNDERTAKERS. COFFINS AT LOW PRICES.” “Since many of Santa Barbara’s winter visitors in the 1880s were in their terminal illnesses, the advertising of Blood and Knight — not too euphonious a name in itself — was enough to chill the marrow. So vociferous were the civic protests, that the controversial sign was finally removed.”

History from Near and Far

It pays to network when you are curious about the history of your house. Chris learned from a neighbor that her home’s property had been much larger in the past and that the family had several farm animals. This was corroborated by a 1909 ad that I found in the local paper for a “milch” (milk) cow for sale at the 324 N. Soledad home.

A few months after the current owners moved into the home in 1990, a woman knocked on the door and explained that her grandfather had built the home. Along with some information about the home’s past, she had a 1920s photo of the Blood family posed on the porch. A porch post can be seen next to the family members — the same post that is there today. Also original to the home is the large pair of pocket doors separating the front parlor from the family room.

Chris Emanuel remembers falling in love with the house 30 years ago. “When I saw it, I knew this was the one. The house has a very welcoming feel to it. It has been very nicely redone and still retains a lot of the original character. There is a lot of very lovely woodwork throughout the house and a great old Mexican pepper tree in the back.” 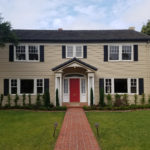